With a villain flatter than paper, a bizarre dog with R rated barks, and a frustratingly lovable robot voiced by John Krasinski, Joe Ksander and Kevin R. Adams’s animated action-adventure Next Gen is a film that really shouldn’t, and doesn’t, work and yet still manages to pull you in for a warm embrace.

In a futuristic city where everything from Instant Noodles to friendships is technological, pre-teen Mai (Charlyne Yi) rolls her eyes at society’s obsession and seemingly owns her title of ‘outcast’. Playing football alone, her smile is wide as she pelts her way down the pitch, but once the goal is scored the smile fades: there’s nobody there to celebrate with her. Her loneliness, however, is broken when she stumbles across 7723 (Krasinski), a robot built for war that finds itself wanting to help Mai. The two strike up a friendship as they hit the town, destroying robots and terrorising playground bullies as they go. Meanwhile, as night falls the two sort through 7723’s memories, deleting a handful each time to avoid his imminent re-set. A familiar story, but it has heart. The strange pairing teach each other about the importance of painful memories as well as balance between using technology and making real-life connections.

Alas, the story doesn’t quite finish there. A late-in-the-game reveal shows that, our endearing robot was the passion project of inventor Dr. Tanner Rice (David Cross, on excellent form), the mechanical mastermind behind IQ Robotics, the Apple of this universe. Questions are raised as to why Dr Rice would have need for a combat robot, a mystery that is set up and swiftly skated over, as the discovery is made that behind the company’s CEO Justin Pin – who has an unsurprisingly resemblance to Steve Jobs – is a dastardly plan for world domination. Why? Who knows! But it’s up to Mai and 7723 to stop him, before humans become as extinct as flip-phones. 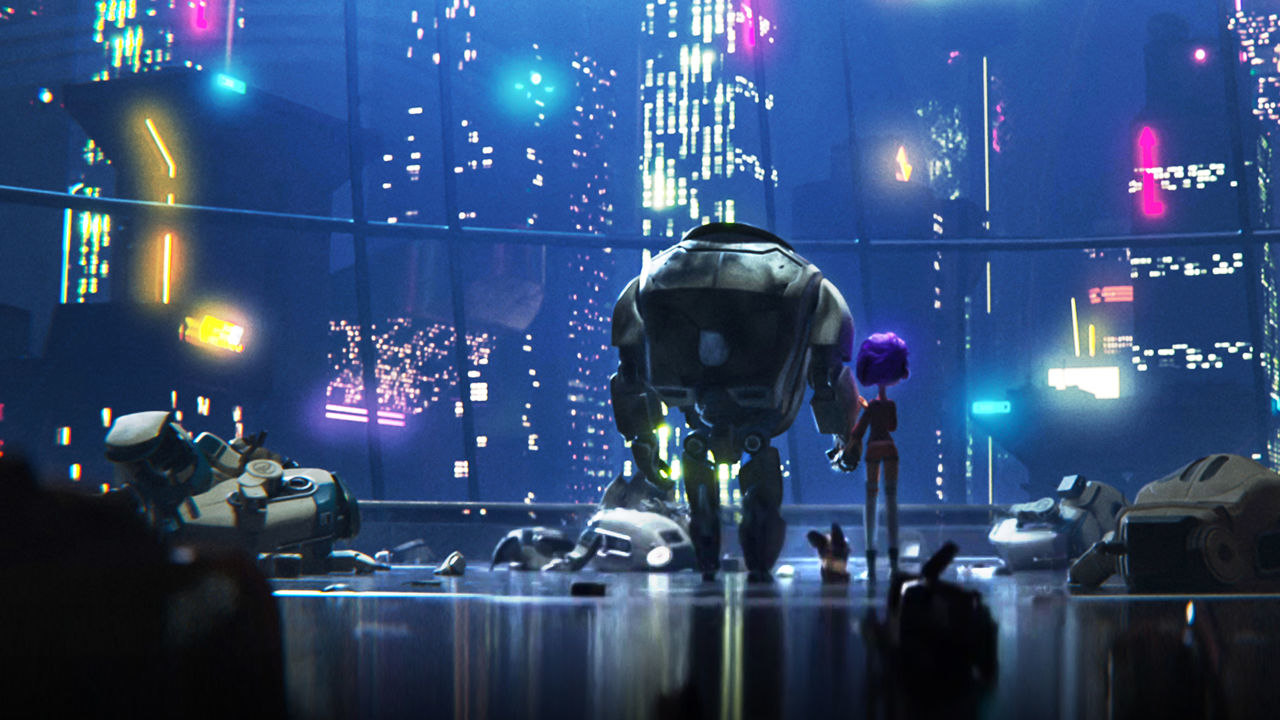 Following in the stead of its messy narrative, the film tonally feels caught between two worlds. Adapted from the short film Gear, written and directed by the same duo, Next Gen maintains all of the great things about the short, whether or not they logically make sense in this family-friendly flick. Gear is dark and dangerous; it’s young Mai is bruised and hard-worn from a hard life, stealing and fighting to get by. It’s world is dystopian, technological but dark. When 7723 appears, simply named 3, he looks like a machine ready to kill, there is no Big Hero 6 Baymax resemblance here.  Next Gen tries to replicate Mai’s aggressive and beaten down character as well as the the underlying dystopia of Gear, but it fails to develop it any further than the 7-minute short leaving the film with an ambiguously violent kid that never says sorry for the destruction she causes and villains who are villainous simply because they’re supposed to be villains.

They called it a “Happy ‘Blade Runner’”, but that oxymoron is too great to be brought to screen, at least not in a children’s film. That being said, the film is visually quite stunning. Blade Runner in scale and happy everywhere else, with brightly coloured skylines and streets. The animation style is refreshing in its lack of hyper-realism, opting instead for something in between Disney’s later films and Cartoon Network shows. There is a gleam over everything, making it a delight to watch.

There is a huge missed opportunity in this films production; the source material is strong as is the cast with Krasinski, Yi and Cross giving compelling voice performances that would be far more effective in an uncluttered narrative. Netflix’s latest family friendly adventure is a rich yet chaotic film that will have you laughing at it more often than with it and one that isn’t quite pretty enough to make it worth it.