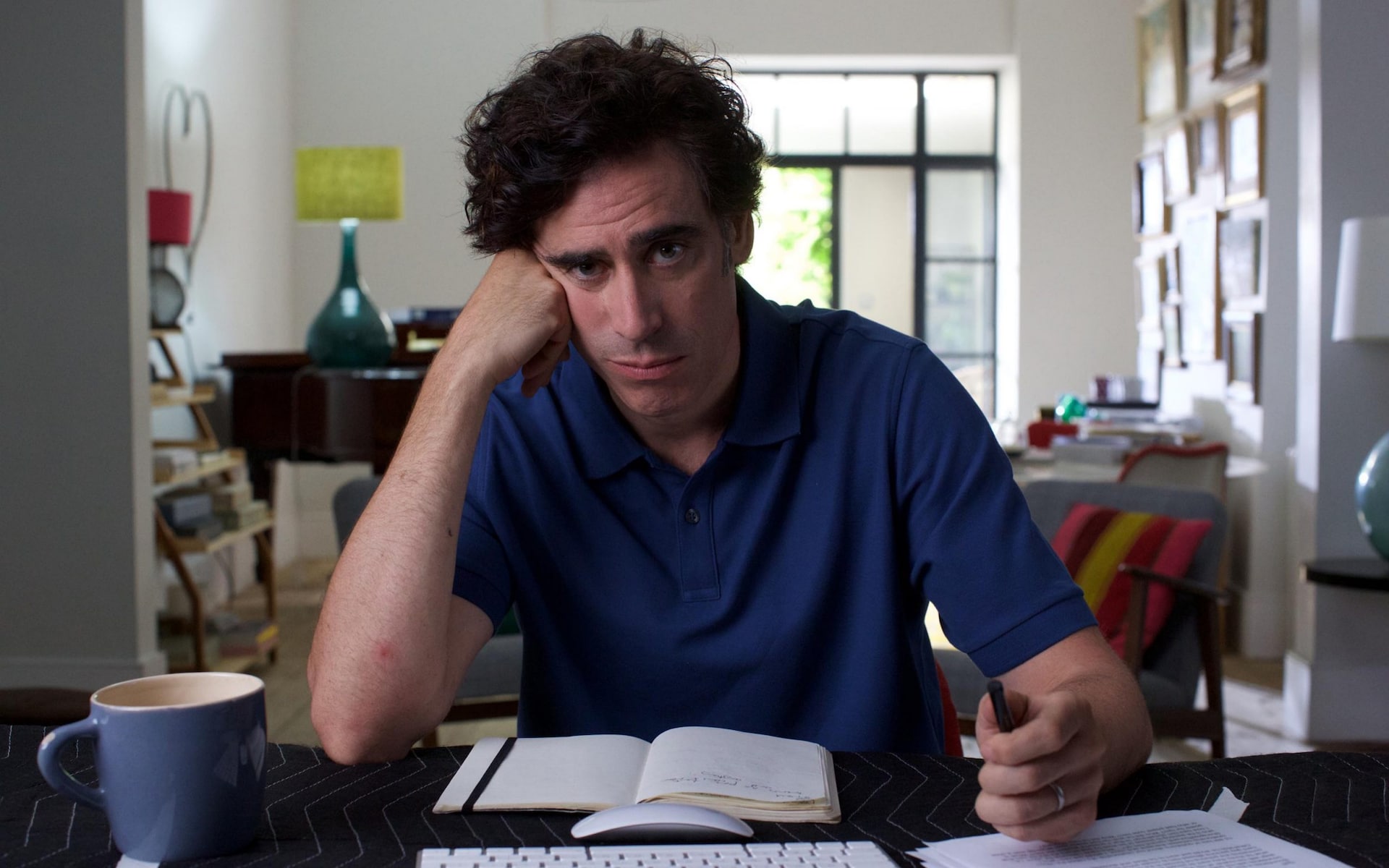 Stephen Mangan, this time in partnership with Robert Delaware, is back on our screens for the third time this year with new comedy show Hang Ups – loosely based on Lisa Kudrow’s series Web Therapy (2008 – 2014) – that will have you out of breath, though not entirely from laughter.

With Mangan in the leading role as Richard Pitts, a debt-ridden psychiatrist who’s turned to holding online sessions from the (dis)comforts of his own home to get a hold on things again, other A-listers follow in his supporting cast: Katherine Parkinson is Karen, Richard’s strait-laced business woman wife, Charles Dance is his father Jeremy Pitt, and Richard E. Grant is Leonard Conrad, Richard’s own oddball therapist whose comedic chemistry with Mangan is sheer brilliance. And it doesn’t end there.

Dedicating the majority of its runtime to short snippets of Richard’s sessions with clients, hilariously improvised for full absurdity, its no surprise how many cameos they can fit in, with each client sporting a big name. We see Sarah Hadland,  Lolly Adefope, Monica Dolan, David Bradley, Alice Lowe, Jo Joyner, Darren Boyd in this episode alone and can expect David Tennant, Kevin Eldon, Celia Imrie, and more in episodes to come.

It’s through these interactions that we see the state of Richard’s life, namely a mess. As a therapist, we might expect him to be the voice of reason, the calm within the storm that life can be, but he isn’t shown that way in the slightest. A ‘typical-messy-father’ he misses his son’s Career meeting, forgets to restock the fridge, and tells his kids to keep shut about it all from their mother. It’s funny, but then it is well-worn territory for comedy shows. There’s even a gritty debt-collector (Steve Oram), portrayed in the most laughable of fashions with dark red curtains behind him and a deep blue lighting his face as if he were intentionally imitating Saw’s Billy the puppet, that adds another layer to the returning storyline of the Pitts family. With this storyline, Channel 4 has promised themes such as homosexuality, failure, and growing up in addition to the theme of mental health. In episode 1, however, its hard to see any evidence of this.

What’s most interesting about Hang Ups is the way it’s filmed; almost the entirety of the episode is portrayed through screens – Skype calls, desktops, tablets, phones. Any household communicating device you can think of, it’ll be there. Much like Channel 4’s popular Peep Show, this method of filming helps to create POV’s that are so recognisable in our modern society and is simply done through the use of GoPro cameras. But, unlike the shows’ inspiration Web Therapy, the show does move away from the devices. The brief scenes filmed in a more traditional way appear rather randomly in the series debut, taking you out of their technological setting for no reason other than ‘there’s no laptop in this room’.  Nevertheless, it feels as though these real-world deviations will expand as the show goes on and the story develops.

Hang Ups is setting itself up as a thoroughly entertaining new comedy series; taking the 10pm slot on Channel 4, the show is as bawdy as you might expect and it uses this to its advantage. Hopefully, it can stand its ground with the development of its returning storyline rather than relying on its plethora of star-studded cameos, however hilarious, and stressful, they might be.