“Do you believe the dead can communicate with us?”

With BBC’s Requiem, starring Lydia Wilson, Joel Fry, Tara Fitzgerald Claire Rushbrook and more, came the promise of a TV horror series to rival The Living and The Dead, maybe even some of the wonderfully dark Inside No. 9 episodes (yes, I am thinking of the season 1 finale The Harrowing!). Often does the channel present us with paranormal dramas and horrors, most of which send shivers down our spines, but rarely have us leaping behind our sofas with fright. Having read the set up for Requiem I desperately wanted this series to be the one to do exactly that, however its story and scares play too often in piano when they needed to be forte! 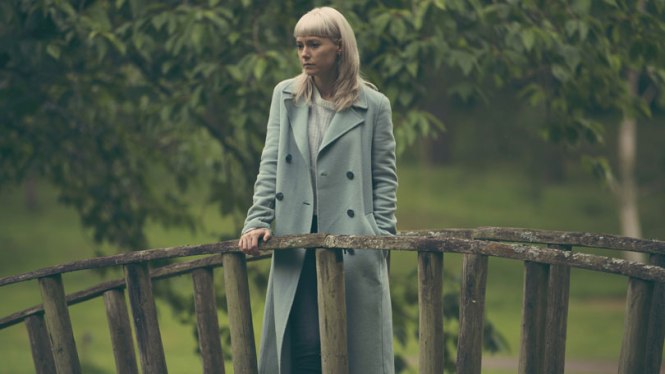 What’s it all about?
Breakthrough cellist Matilda Gray (Wilson), after witnessing the disturbingly spooky suicide of her mother (Scanlan) in the opening 10 minutes of the show – a pleasant way to start this horror, decides to leave the brutalist London behind her and heads to the quaint village of Penllynith to seek out the truth behind a 23 year old missing child case which seems to be inextricably linked to her mother’s death. As Matilda, alongside her friend and accompanist Harlan (Fry), explores the village and its inhabitants, she finds nothing is as it seems and is forced to question herself and what she knows to be reality.

What’s the judgement?
Everything about this premise works in theory; bringing in aspects from both crime dramas and horrors, with Matilda and Hal as the typical Holmes and Watson and a chilling soundtrack by Dominik Scherrer and Natasha Khan, you constantly question whether this is, in fact, simply a psychological thriller parading as paranormal horror.

But practically, as with any contemporary horror drama, Requiem does fall into some familiar tunes. The sleepy yet suspicious small village as a setting isn’t totally original but what Requiem does is it takes advantage of its place; occultism, Celtic paganism, and Welsh mythology (not all of which is seen in the series, unsurprisingly) are played on, though they only really scratch the surface. Is this a missed opportunity or an audacious hope of a second series?

Despite being ultimately disappointed by the story the performances were all outstanding, in particular, Fry’s selfless, sarcastic, and cynical performance as Hal. Throughout the series, he is the one who draws your sympathy the most; willing to wait on Matilda hand and foot despite her seeming indifference towards him, a relatable victim of unrequited love, his character feels the most authentic.

It is the cast as a whole that this show so watchable. Wilson brings to life a strong, flawed character who you struggle to like though in the best ways (we need more imperfect and multi-dimensional female characters like her) and Tara Fitzgerald shines as the quiet Slyvia Walsh, reminding us of her chilling performance as Selyse Baratheon in Game of Thrones.

Though Requiem isn’t the terrifying horror we had hoped for, and the story feels somewhat underdeveloped, the show is sure to shock and spook many viewers. There is, nevertheless, something very watchable about this series, I myself was hooked enough to binge it within a day. The tune played hard and fast, but I doubt it will stick in my head for very long at all.

Are you watching Requiem? How are you enjoying it?
Let me know in the comments below!