Gregory Doran directs this incredible and innovative production of one of Shakespeare’s most famous comedies, The Tempest, mixing breath-taking visuals with delicate and funny performances.

I always seem to watch the best plays just before they’re about to finish; The Tempest, following a successful run in Stratford-Upon-Avon, moved to the Barbican Centre for a seven-week run and is now in it’s final week. I was determined to see it since I had seen all the hype surrounding the ground-breaking technologies used in the show and, after luckily getting myself a front row ticket, I can say it exceeds expectations! If you have the chance to see the show and are interested in Shakespeare even in the slightest I highly suggest you go, you won’t be disappointed!

I’ll start with the performances, in particular Simon Russell Beale’s Prospero and Mark Quartley’s Ariel, the latter being the one who stole the show for me.Prospero has always been a very interesting character who can be interpreted in various ways: the colonialist, the failing father, or the revenge seeking Duke. However through Beale’s performance we see a side to Prospero that often is missed, his internal struggle between his desire for revenge and his guilt at his own actions. That alongside the love he has for his daughter and his Spirit Ariel is beautiful to watch on stage, his despair at losing both of these companions is shown clearly through his subtleties of language and stage-craft. The moment when Ariel asks “Do you love me master?” and Prospero falls into tears showing his vulnerability is truly heart-breaking. This continues on when we see Prospero’s treatment of Caliban change; from the unforgiving dictator he becomes a man who knows he’s done wrong and is willing to change his ways. 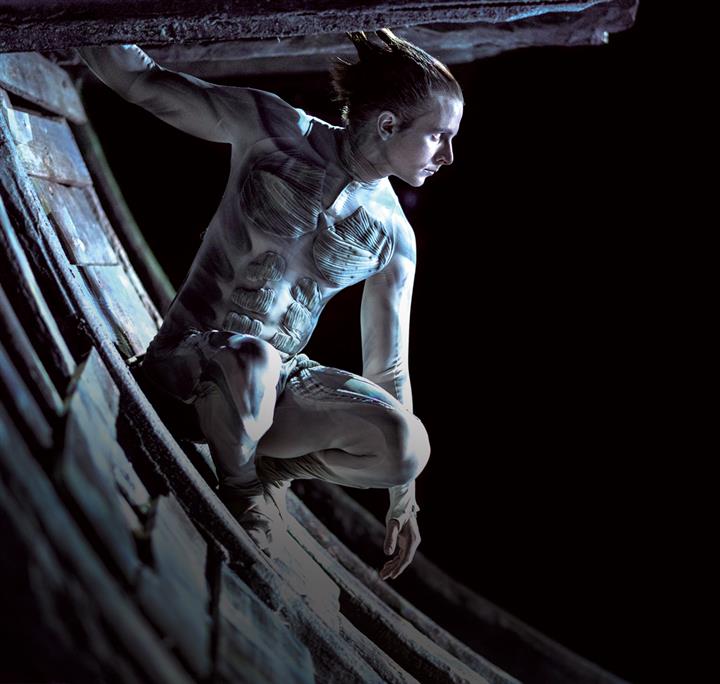 As I said earlier though, it was Quartely’s presentation of Ariel that astounded me the most. With the amount of ‘live performance capture’ used, and done effortlessly through the use of sensors within his costume, it wouldn’t have been surprising for his real character to be lost. But that is certainly not the case. In fact it’s in the moments where Ariel climbs around the staging watching over the other characters that were some of the most powerful; we see him learn to stand up for himself and what it means to pity others. He stands tall when telling Prospero about the impacts of his spell on the other shipwrecked men:

Ariel:  Your charm so strongly works ’em
That if you now beheld them, your affections
Would become tender.

Prospero: Dost thou think so, spirit?

Ariel: Mine would, sir, were I human.

His subtleties paired with the larger and more outwardly dramatic scenes, such as his arrival as the Harpy, just show how talented he is. Perhaps having Quartely on stage alongside his ‘avatar self’ detracted a little from the ‘avatar self’ but I personally enjoyed seeing his live performance being transferred right there on stage, it was a testament to the skill of the entire team in pushing the boundaries of the relationship between Shakespeare and modern technology. What’s more is that not only does Quartely have to act, climb, and move in a way to best present the ‘Spirit’ version of himself, but also he sings. The music throughout the play was utterly magical, especially the songs in the second act which had me in tears, and I particularly loved “Where the bee sucks”. Everything about it was just otherworldly.

The way Doran presents secondary characters too is lovely to see. Despite being a comedy and quite clearly taking inspiration from masques and commedia dell’arte, none really feel like stock characters, each is brought to life. I really enjoyed the relationships between Antonio and Sebastian as well as the comic trio of Trinculo, Stephano, and Caliban. The comedy offered by these characters was brilliant – particularly the audience interaction by Trinculo!

Of course it would be wrong not to state how gorgeous everything was about the play. From the rib-cage like structure of the ship that acted as the setting of the play to the colourful and harmonious vignette of Iris, Ceres, and Juno. I have never seen a play like this one before and doubt that I ever will again. It is simply ingenious how the creative team takes up the challenges set by Shakespeare in writing his play, with stage directions such as “enter ARIEL, like a harpy, claps his wings upon the table, and, with a quaint device, the banquet vanishes”.  There is so much more I could say about this play but I think I shall leave it with this conclusion:
this play truly is a spectacle.