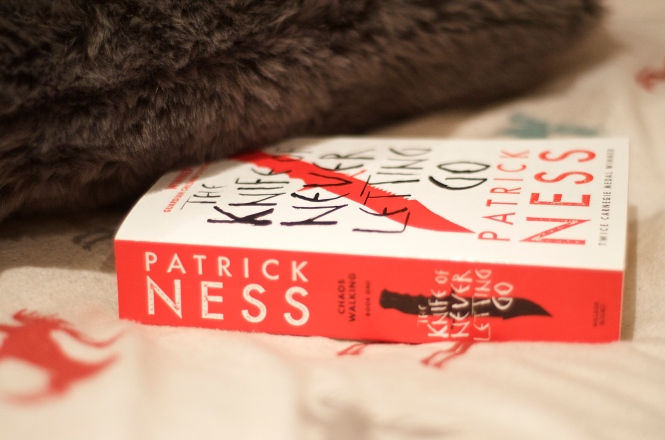 The Chaos Walking Trilogy has been one of those series which I had always heard about – always great things – but never got round to actually starting. Thankfully the first novel of the series, The Knife of Never Letting Go, was voted for my Online Bookclub‘s first read of the year!

The story is set in a dystopian future where, after a group of families are forced to flee to the New World and have to fight off the alien inhabitants, the thoughts of every man are projected to everybody else. This unsettling history is not fully explained until further on in the story which is both incredibly frustrating and fantastically connecting. You, as the reader, learn the truth about the New World and Prentisstown at the same time as Todd, the protagonist. The setting is created so well, I’ve spoken before about Ness’s ability to fabricate brilliant detailed worlds and that is again shown here. He really allows you to visualise and place yourself in this irrepressible Noise and it is presented as absolutely horrible with everything so public. It did make me think about our own Noise due to our peculiar relationship with technology and social media.

As Todd makes his journey from Prentisstown with his loyal dog Manchee the world continues to develop and it is wonderful to read; there’s an “action sequence” right at the end of the book that is set in the most beautiful place (I’m not going to spoil anything)! Todd’s character matures so much throughout the book and he feels utterly real. Ness writes from different points of view – using fonts to more easily distinguish characters – but Todd’s uneducated dialect is so recognisable. You can just hear his voice! At first it was quite annoying but after a while you get used to it and you realise that it compliments the fast-paced plot and emotional language. In fact there’s quite a lot about this book which will take you a little getting used to but that’s not necessarily a bad thing, it’s a testament to how unique a read it is! But do be prepared.

The mystery in this novel is superb. Despite it being a pretty thick book you get through it quickly; it is so compelling and you end up turning page after page after page just to know what happens next. Another thing that I and many others enjoyed about this book was the absence of romance. We all like a cute love story but they’re sometimes hard to avoid, so to have a strong boy-girl relationship which is platonic is lovely to read. The friendship between Todd and ‘Mystery Character A’ is the main focus and it is executed really well and really realistically; they don’t always get along but they care for each other no matter what. I really appreciate a relationship like this because there isn’t an imbalance between the two, sometimes in romance novels it can feel like the female is totally dependent on the male or vice-versa and I don’t feel like that’s a good representation. Whereas here they both need each other, they are both strong and they are both important.

The Knife of Never Letting Go is so unique, full of action, and an absolute emotional roller-coaster with one death that I assure you will make you put the book down for a little bit just so you can process all the feels!

I’d recommend this book to anybody looking for something a little different – I mean this book has a talking dog and he pretty much makes the book! It’s definitely one that I think almost anybody could read and enjoy.

4 thoughts on “Book Review: The Knife of Never Letting Go by Patrick Ness”