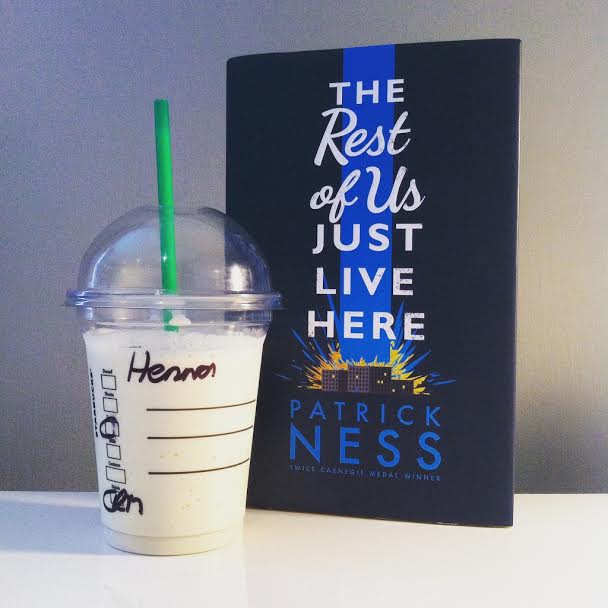 “Not everyone has to be the guy who saves the world. Most people just have to live their lives the best they can, doing things that are great for them, having great friends, trying to make their lives better, loving people properly.”

I read More Than This by Patrick Ness last Autumn and instantly fell in love with his writing style; the way he uses words, his choice of words, his  wonderful use of punctuation and structure. I remember finishing it and just sitting there in awe. Since then I’ve been desperate to get my hands on his other work. Somehow it’s taken me up till two weeks ago to do so when I bought  The Rest Of Us Just Live Here. After finishing this book I was reminded of all the reasons I adored (and continue to adore)  Ness’ style.  I seriously need to get my hands on the Chaos Walking Trilogy!

This book is based on the  concept of not being the chosen one but instead being the people trying to get on with their lives whilst hoping that nobody blows up the school – ‘again’.  This idea is so unique and was executed very well. With the book being based around the more mundane life it could have easily slipped into becoming very dull and slow. But fortunately it didn’t! In fact it was quite the opposite. The plot isn’t action driven, the focus is on the characters and their development. However the reader is still kept in the loop with the plot of the chosen one via the chapter titles. Each one stated the number of the chapter (e.g. Chapter The First) and then a quick summary of what’s happening to the ‘Indie Kids’. The actions of these Indie Kids does affect the characters that we follow and so without these short rundowns  a lot of things going on in the book would have made no sense whatsoever, and so was a very clever and entertaining thing to do.

As said before this book is highly character driven. Our protagonist Mikey suffers from OCD and has been in love with one of his best friends, Henna, but has never told her how he felt. The story follows the relationships between Mikey and his friends during their final year of school and how they alter due to the mystery provided by the Invasion of the Immortals. Mikey was a brilliant character to read, he was so flawed. He was suspicious, jealous and doubted himself all the time but then he was also fiercely caring and could be hilarious. Similarly all the characters had their own issues making them developed and realistic. Jared – Mikey’s gay best friend –  was probably my favourite character. As quarter-god (of cats) Jared shows the most protective nature towards lives of mountain lions, cats, and mostly his friends. He understands what Mikey is going through and whenever he can will try to help him. But he also provided some mystery to the novel, he’s a bit of an enigma; with secretive Saturday nights out and a general inability to pin-point what exactly it is he wants. Jared was a brilliant addition to their mismatched friend group.

There was an amusing tone that ran throughout the book caused by the normality of such abnormal things. Vampires? Soul Eating Ghosts? Quarter-god best friends? It’s all commonplace.  This reminded me slightly of Welcome To Night Vale and is something I find really enjoyable. Nevertheless the tone could switch from light-hearted to serious very quickly. But whichever mood Ness was writing in he did incredibly well; funny at some points and sombre in others.

Overall a really interesting idea carried out brilliantly, with characters who felt more like friends than anything else.

2 thoughts on “Book Review: The Rest of Us Just Live Here by Patrick Ness”