“Family is only where there is love enough. For them it was there, in that unlikeliest group of people . . .”

I was lucky enough to hear David Whitehouse talk about his new book Mobile Library and writing in general at an event held by Booka Bookshop – my favourite  bookshop – along with two other authors from Picador:  Rebecca Wait and Sarah Butler who both have books that I am desperate to read! It was an amazing evening filled with interesting questions and answers from the authors, some readings from their new books and also some pizza, which always makes everything better! Whitehouse said something about writing which I thought was incredibly true and it really resonated with me:

“Writing is an act of suspended madness”

After hearing that and realising I could only afford one of the three books at the time I knew I had to go for Mobile Library. Also I knew I had to buy it just down to the fact that it was set around a mobile library and used the love of books to convey a vast number of wonderful messages. What’s not to love? 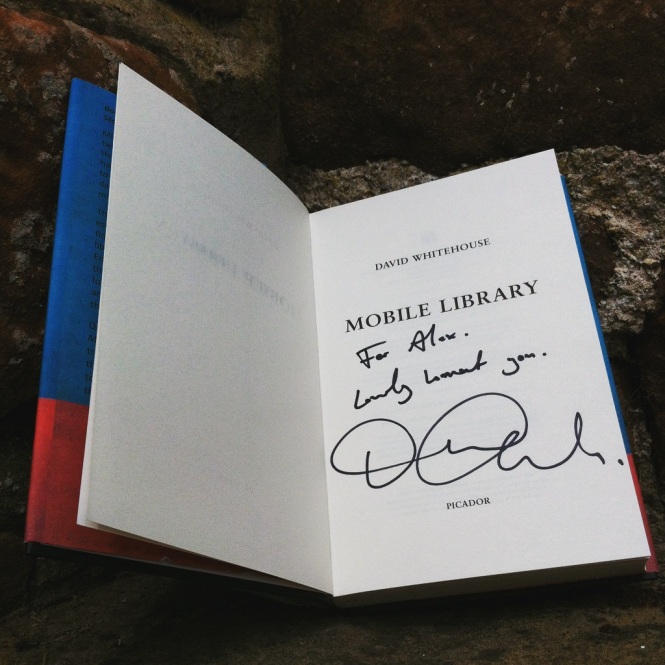 The characters were very diverse and complex which provided them the depth needed to help make the plot feasible. On that note I have to admit I loved how Whitehouse wrote to make the most bizarre situations totally believable; it reminded me a little of Jonas Jonasson’s The Hundred-Year-Old Man Who Climbed Out of the Window and Disappeared. For example the story of Sunny and Bobby’s attempt to “create a cyborg”.  This storyline would sound absolutely insane to most people but seemed utterly normal in the head of these two twelve years olds desperate to help one and other. This continued throughout the novel and really proves just how good a writer Whitehouse is.

Now, the characters. Bobby Nusku was exactly how I wanted him to be; starting off as a terrified and abused child and developing into a caring and imaginative – and surprisingly philosophical –   young boy who no longer needed to be afraid but had in fact found his family.  He was just so sweet! One of my other favourite characters was actually Joe, sadly he’s introduced quite far into the book so I don’t want to say much just in case of spoilers. But his integration into their peculiar family was really enjoyable to read. I think this was because his character slightly reflected that of Bobby’s father, except their relationship was much more loving and both relied on each other, it wasn’t a case of one being more important that the other. The references to Of Mice and Men there was just superb!

The plot as a whole contained a lot of twists and exciting moments. But it was the scenes of normality that I think had the real impact. When they were sat around the fire telling stories, when they were sneaking out to pubs whilst fully aware that the police were looking for them, when they were driving in a Mobile Library admiring the light of the day. Mobile Library is about finding your family, and in these moments of normality you could see that. These random people had come together and – as cheesy as this sounds – completed one and other. And maybe you don’t have to own a mobile library to find that family of your own.