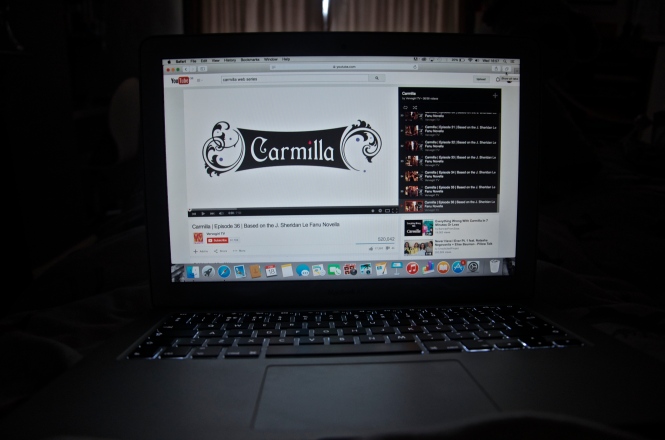 YouTube as a platform for content creating has expanded incredibly over the past few years.  The best thing to come from this has to be the web series that are being made by some amazing people. I’d absolutely love to be able to get involved in making a web series but for now I’m satisfied just watching them. So I thought I would share my top five web series that you really need to watch!

I only actually came across Carmilla yesterday and I binge-watched the entire 36 episodes. Most ones are only 3 minutes long – with the exception of a couple 6 minutes episodes – so there’s no excuse not to watch them. And what’s even better than that is that the story is so compelling! Based on the book of the same name (which I also bought yesterday) it follows a student called Laura who takes it upon herself to investigate the disappearance of her roommate, when the mysterious Carmilla becomes her new roomie. I loved this so much; the characters are brilliant and relatable and it manages to be so funny as well as exciting and mysterious!

Aww what can I say about The New Adventures of Peter + Wendy…it’s just wonderful. I have always loved Peter Pan and this adaption is just perfect. Filmed by Tink herself as well as Wendy’s Darling Videos the series is just magical and heartwarming. The characters are exactly how you’d want them to be; everything is a lot of fun but with some twists and turns along the way you may potentially be left in tears. Be sure to watch this one!

The only web series I’ve watched that hasn’t been based on a book happens to be about living life as if in a book. Classic Alice is a ‘documentary’ of a student called -you guessed it- Alice who decides to live her life according to classic novels and gets caught up in a load of crazy stuff along the way. I love how this is filmed but it’s the story that really stands out for me. Alice is just this adorable bubbly character who loves her books and her writing (just as I do) and you really feel for her and almost come to see her as a friend. And of course there’s a potential love interest involved and he just makes everything better! Watch and share this series, it really deserves it.

Frankenstein, MD is so intense!! Seriously!! I somehow found this series just before the final episode came out. This lead to me staying up all night watching all the episodes and then frantically waiting a whole week for the finale which was definitely worth waiting for – even though I almost cried. As you can guess from the title this series is a modern adaptation of Frankenstein by Mary Shelley. I can’t sum up how much I love this web series. It’s beautifully filmed but the story is so tragic and argh. Love it. Just love it!  I even had my haircut inspired by Victoria’s!

The Lizzie Bennet Diaries is an adaptation of Pride and Prejudice – which you probably guessed already. This is the first web series I watched and just like most of these I watched them all in one go. The show uses costume drama in the videos which helps to show more of the story without having to move the camera around. It’s great fun but can go deadly serious and emotional when it wants to. What I and many others love about this serious is that it really helps show some of the ideas that the book and other adaptions struggle to show; other characters offer different perspectives on different situations which helps the viewer see all sides of the story! Also, Jane’s style is second-to-none!

What are you waiting for? Get watching!

5 thoughts on “Web Series You Need to be Watching”